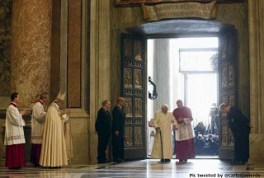 A prayerful and spiritual beginning of the Jubilee year of Mercy brings the Church and humanity into a new realm of grace and life. It is noteworthy that this Jubilee year was inaugurated on the feast of Immaculate Conception of Mother Mary, Mother of Mercy. As a part of the celebration of this jubilee year, it might be enriching to keep the prayer of Pope Francis in mind in one’s daily prayer. The jubilee year of Mercy is an extra ordinary one in many ways.

Today, each one of us has been fortunate to be a part of this historical moment and witness it. The Church asks us to focus our life on forgiveness, compassion and mercy, just like our forgiving Father, compassionate Mother, and merciful Son.